Previously: The city of Phlan fell victim to a sudden attack from the Cult of the Dragon, led by the impressive green dragon known as Maimed Virulence. Amidst the chaos, the four “not-exactly-heroes” of Phlan ready themselves to storm the Castle, while their brave ally, Lieutenant Aelid, prepares a diversion. 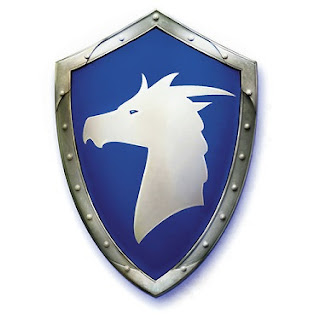 Ecce Deo!
Lieutenant Aelid died a horrible death in front of the gates. Period. And that’s just it. This is how I inform the world of the death of the only non-chaotic-evil NPC in the campaign. The only NPC which I didn’t have an immediate urge to “Hammer to Fall”. Alas! That is life as a D&D player. Everything dies around yourself. Sometimes you die yourself. And then come back to life. And then die again. And then come back to life again. And that is the meaning of life.
IN D&D!!!!! Kids, do not try this at home!!!!
Stonejaw Gate closes behind the heroes. Countless "true" guards are tied in courtyard. Actually, this information in inaccurate, since the DM told us that there were EXACTLY 124 guards in chains. The berserkers from the Cult of the Dragon focused on us. Swords were drawn... And Septimus disappears after one of the guards. Yeah, his player had a last minute problem and couldn't attend the session, so the tiefling started running after the guard, and went M.I.A.
But, I digress. Let me remind you, dear reader, that the characters, at this point, were rather beaten. My brave cleric didn't have a single spell slot available, the quantity of healing potions was quite reduced, and our hit points weren't exactly maximized, and the horned-guy-that-shoots-eldritch-blasts had just ran off-screen.
So... Long story short, Sasha fell to the repeated beating of one of the evil guys' TWO-HANDED-GREATSWORD (thanks a lot, dear beloved DM; may you rot in hell, and the abyss, and so on, and on...), while Lanza used his magic to crowd-control the other evil guys with some fear effect. The problem was a minor detail called cambion. After he mind-controlled Khan, things were looking pretty towards the "it was a good ride, guys, but the campaign comes to an early end".

But, apparently, the party didn't have its demise scheduled for this particular moment. Hidden among the captives was Lord Hector Brahms, who jumped after the cambion, forcing him to leave the scene. Simultaneously, Lanza managed somehow to withstand the hits from the last standing guard. Meanwhile, Khan was unconscious, slipping into the long night. At that moment, a booming voice manifested itself in the cleric's mind.
BAHAMUT!
Khan was overwhelmed. His link with Marthammor Duin had been faltering in recent times, and a direct contact from "a god of dragons" was the last thing he was expecting.
Joining forces, the two last remaining heroes manage to clear the board and free the guards. But the cost was too high. Sasha's body lays lifeless on the floor of the courtyard. Khan walks towards the fallen comrade, takes her body in his arms and raises it towards the heavens. "Hear me, oh Bahamut, Lord of Dragons! If you'll accept me as your loyal, unflinching servant, I pledge my life to your cause, vowing to abandon everything behind me. I ask thee only to restitute the Breath of Life to my brave companion!"
The dwarven cleric's right arm points at the sky, and a flash of platinum descends towards it. His hand touches Sasha's forehead, and the ranger comes back to life.
Khan experiences an awakening. He drops his magical warhammer, tears his vest apart, and joins the escaping prisoners.
Wow! How's that for "a stupid game where you only roll dice and kill stuff"? In thy face, haters!
Gathering what remains of the captives we RUUUUUN TOOOOO THE... SEWERS (hmmm, not exactly the same as Iron Maiden), where a rotting, stinking, bitch drow asks us 250 gp to take us safely out of the city, along with the survivors. So, yes, the bastard DM refuses to give us treasure, AND keeps the day emptying our pockets! Where's the Complaint Form Nº 174-A/2580 to send to WotC?
We board a boat, and under the cover of night flee to Mulmaster, across the Moonsea…

The Tyranny of Dragons has arrived. May Bahamut guide our steps, and Tiamat use the DM as a backscratcher.

CAUTION: Reading this blog may cause you to become seriously addicted in roleplaying games (RPG) such as Dungeons & Dragons (D&D).You have been warned.