Previously: Several have been the services that the heroes--- errr, let's just call them characters - have performed for the city of Phlan, while the Cult of the Dragon's activity appears to be on the rise. But one must wonder: is there something bigger on the way? Enter the Maimed Virulence
Following several downtime days, the characters gather once again in the city of Phlan. They are summoned by Lt. Aelid to the Laughing Goblin Inn, who shares her concern with the growing corruption within the Black Fists (the city guard). She suspects a rogue named Spernick (prisoner awaiting judgement) is behind it, and wants the characters to investigate it. Unfortunately, the meeting is abruptly interrupted, when an adult green dragon attacks the castle - where the city nobles are assembled - wreaking havoc all over the place.
The Maimed Virulence has arrived! 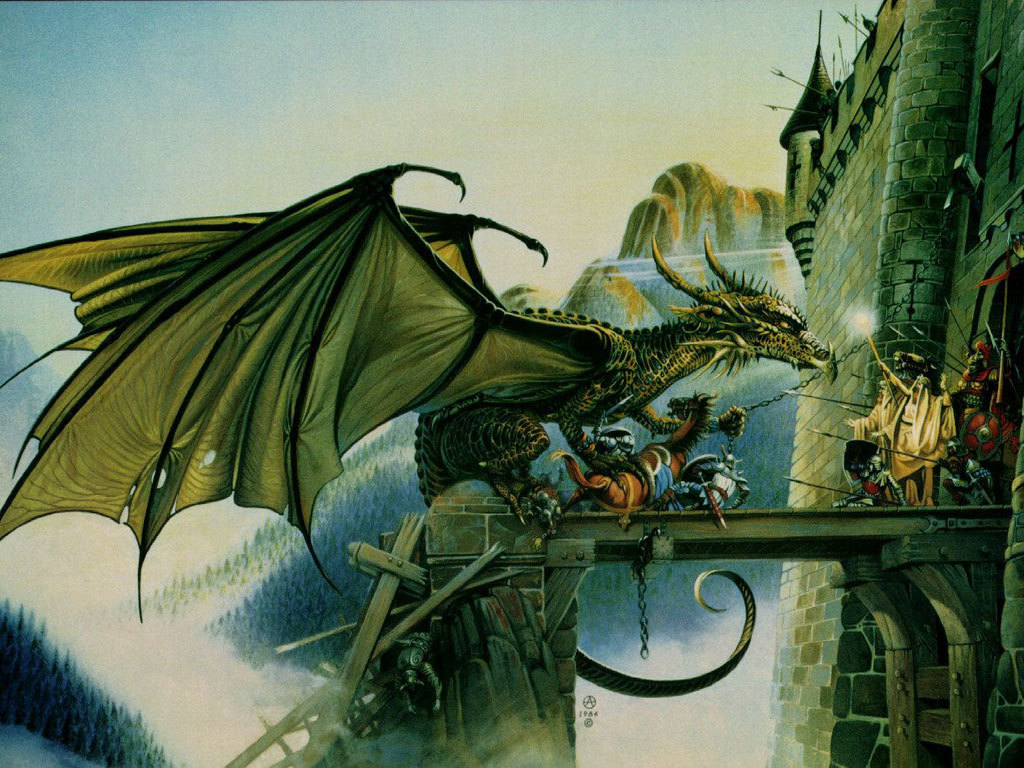 At the same time, several cultists roam the city streets capturing people and dumping them in a carriage pulled by an ettin.
From the Laughing Goblin's first floor balcony, the not-quite-heroes unleash everything at their disposal at the ettin, drawing its attention. The two-headed giant closes in, and spits its foul breath at the almost-heroes. But the beast it is quickly felled.
Khan, the-only-one-resembling-a-hero, sees an evil priest coordinating the attack. While thugs and a giant lizard stampede into the Laughing Goblin, Khan jumps graciously from the window (yeah, you guessed it right... a dwarven cleric in heavy armor with 8 Dex "jumping graciously"...), onto the ettin's corpse, and chases the cultist.
The fight doesn’t go entirely on the heroes’ favor. Lanza and Septimus have a hard time facing the agents of the cult and their giant lizard, and Khan soon realizes that the cultist is indeed a priest of Tiamat, with a power far superior to his (good aligned 5th level cleric VS evil aligned 9th level cleric… guess who wins?).
Albeit drained of spells and resources, the characters manage to survive the assault.

You are Welcome… to leave the city
A GORGEOUS BRUNETTE PRIESTESS OF MORADIN (patron deity of dwarvenkind), with whom Khan will in the future have many sons and daughters (just to be clear: I’m talking about the priestess… not Moradin!), named Eunice Thundershield reports having seen a cambion (evil guy with red skin, horns, and demonic wings – can be easily mistaken with Septimus) leading the cultists, near Stonejaw Gate.
Amid the survivors we reencounter a recent acquaintance: Arya Glenmuir, who has, again, lost her spellbook. She believes the best thing to do for now is to help evacuate the population, but with the streets full of cultists we’re going to need the help of the Welcommers (the bastards that comprise the local thieves’ guild).
On our way to meet the Welcommers we discover that the castle guards have been imprisoned by the rebelling inmates. Oh, joy…

Necessary Evil
Almost arriving at the gate, we come across a group of traitor Black Fists. After a brief period where the party basically serves as punch bags, the rogue guards either flee or surrender. With the city fallen in chaos, and with most real guards captured by the followers of Tiamat, the party is faced with a problem: what to do with the surrendering thugs? Khan, having a background as a mercenary sergeant, is willing to give a clean cut to the traitors, ending their lives. All Hell breaks loose!!! All players and DM start waving their arms in utter shock! "You can't do that! That is evil! Ugly! Ugly! Ugly!" Well, ooook, under normal circumstances I wouldn't, but presently either we leave them here to be freed by the other escapees, or we give them "Judgment Day". "You can't! You can't! What about the bunnies, and the butterflies, and bees, and stuff! That is evil! EVIL!!!"
Khan rolls his eyes, turns around, and carries on. I hate alignment discussions in D&D... Next time I’m playing a paladin of Bane.
And now comes the funny part: amid the ensuing chaos that engulfed the city, Khan received a secret letter from the Harpers. It contained a mission. If Khan wanted to rise in the Harpers’ ranks he had to KILL the rogue Spernick (the one behind the rebelling guards). Now imagine what would have happened if I had decided to fulfill the mission, and kill a detainee entrusted to the city jail. I would be branded a black priest, my face would have been painted in the banners of legions of demons, and my name would have been associated with sheer evil, doom, famine, war, and all other plagues and curses one can imagine.
Curiously, it wouldn’t take long before the events unfolded in a way that would make Khan part ways with the Harpers. But I’ll save the surprises for Part 2.

The Gates of Hell
Stonejaw Gate stands before us, barred and with the cambion in command. But before the party can focus on the enemy, something unexpected happens: Ellissande, a young girl we rescued from being sacrificed at the clutches of three hags, appears mounted on a blind goat and making references to "he who runs below the waves". Khan is mortified! This is young, innocent Elissande! What the hell happened? Septimus inquires about "he who runs below the waves", but, distrusting the tiefling, Khan refuses to share any info with him.
Lieutenant Aelid enters the scene, commanding the few guards she managed to assemble. She's going for a frontal assault at the gates, hoping to create a diversion that allows the party to enter unnoticed.
So it begins!

CAUTION: Reading this blog may cause you to become seriously addicted in roleplaying games (RPG) such as Dungeons & Dragons (D&D).You have been warned.